This image from 1936 depicts a young woman in Minnesota learning to sew in order to be able to work in the textile industry and thus become better able to provide for her family.

According to the National Women's History Museum (http://bit.ly/1LEaWbx), the Great Depression pushed a great deal of previously non-working housewives and young women into the workforce. As steel and rubber mills collapsed and left their male employees without jobs or income, women found comparatively abundant opportunities in the manufacturing industry.

This image in particular intrigued me because it's quite obvious that, while the young woman in the picture has clearly chosen to wear a natural makeup look, she has still put in the effort to groom her eyebrows, apply mascara, and curl her hair before going to work. This is a wonderfully candid example of the importance of cosmetics in action. This woman, who is wearing a wedding ring, has probably never had to work before thanks to her husband's earnings, but now finds herself facing endless hours of minimum wage work in order to provide. And yet, even in the face of such a daunting future, she's armed herself with beautifully curled haired (albeit pinned back so as not to get in the way of her work), a feminine floral dress, and subtly applied makeup. I don't know her personal reasons for doing this, but I have to assume that it's not for the benefit of attracting the opposite sex. There is a still-surviving misconception that women use makeup in order to appear more beautiful to men, and yet this woman was already married and furthermore would have spent her entire day surrounded only by other women. She is not making herself more beautiful for the sake of attraction, she's making herself appear more beautiful for herself, or perhaps for her fellow female coworkers, or maybe even just for the occasion of having her picture taken. Whichever one is true, I can say with certainty that her reasons had nothing to do with appeasing the male gaze, and that is an immeasurably crucial detail.

That detail underscores the whole reason why I am interested in makeup during the 1930s in the first place: because it represents not a conveniently simple concept of attraction but rather a beautifully complex concept of what it means to retain some semblance of control over one's personal appearance.

The maintenance of beauty is not addressed in regards to any of the main female characters in Grapes of Wrath, and maybe that is because Steinbeck knew how any large audience would interpret such a description: as shallow, selfish, and entirely unnecessary. But I, for one, would not have judged Ma for sleeping in rag rollers or using petroleum jelly and dust as mascara. I would have viewed it as a deeper glimpse into her psyche not as a woman but as a person. 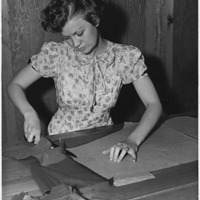